Last Friday we had a retirement potluck for someone at work, and one of the best things I ate at this little shindig was a slice of spinach mushroom quiche.  I don’t know why, but I hadn’t had quiche in a long time prior to last week.  This seems a little weird to me because I have an abundance of eggs and I love savory pies.  Maybe it’s that quiches are calorie dense or maybe it’s just that I make so many other things that I forget about quiches.  A quick look through about half a dozen of my cookbooks tonight produced approximately 1 quiche recipe.  This was a shock to me, but also another reason why I may not make quiche that often–if I’m looking through a cookbook for inspiration, there’s nothing there to inspire me, much less remind me of quiche.

I had a large bunch of asparagus that needed to be used…desperately.  I decided I would make an asparagus-themed quiche.  Since I love spinach, it seemed natural that I would include that in the recipe as well.  A quick look on the internet gave me an idea of how many eggs to use and other common-theme items for the egg mixture.  The rest of it I made up as I went.  And the following recipe turned out pretty well, if I do say so myself. 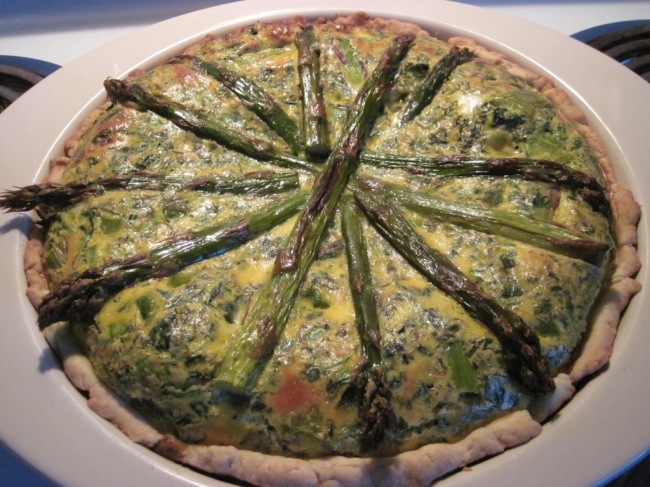 Place asparagus in a large roasting pan and drizzle with olive oil.  Toss to coat.  Roast in the oven at 350 degrees F for 30 minutes.  Turn off oven and leave asparagus in oven for an additional 20-25 minutes.  Then remove and cool completely.  Meanwhile….go for a run!  Or continue prepping the quiche.  Your choice.

If you are not using a pre-made pie crust, make the crust yourself:

Combine flour and salt in a food processor, add butter and pulse until butter is incorporated as small pieces.  Slowly add water, pulsing until the mixture is moist, then process until the dough comes together as a ball.  (If you don’t have a food processor, cut the butter into the flour using a pastry blender or a couple of forks.  These days, I’m lazy and tend to use my food processor, even though it is loud enough to wake the dead.  It turns a 10 minute process into a 2 minute process.)  Turn dough out onto waxed paper and roll into a circle that is approximately 1/4 inch thick.  Place dough in 9 inch pie plate and prick bottom and sides several times with a fork.  Bake at 425 degrees F for about 7-8 minutes, until crust is just beginning to turn light brown.  Remove from oven and let it rest until you are ready to fill it with the egg mixture.

While the pie crust is in the oven, make the egg mixture:

1 cup half and half

Mix all ingredients in a large bowl.  Once the asparagus has cooled, take 2 long (approximately 8 inches) stalks and set aside.  Cut 8 long stalks in half, so that each half is approximately 4 inches long.  If your asparagus is shorter than 8 inches, cut the asparagus so that the top part of the asparagus stalk is 4 inches long.  It doesn’t really matter how long the bottom part is because you are going to chop it into 1 inch pieces and throw it in the egg mixture.  Cut the remaining asparagus into 1 inch pieces and add to egg mixture.  Pour into partially baked pie crust.  Arrange the 2 long asparagus stalks on top in an X shape.  Then place 2 short asparagus stalks between each V of the X (as shown in the photo above), to form a radial pattern.  Bake at 425 degrees F for 30 minutes.  Allow quiche to rest for a few minutes before serving. 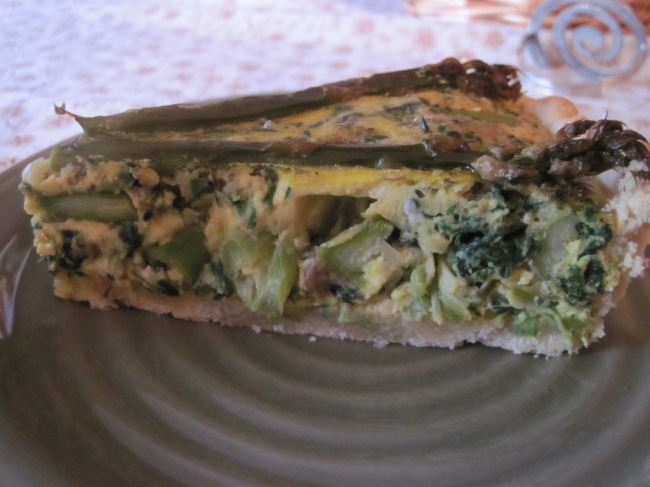 This entry was posted in April 2014, Food and tagged asparagus, food, quiche, spinach. Bookmark the permalink.